Sanur, one of the popular sunrise beach destinations in the South Eastern Part of Bali. A popular beachside location for couples or Families, perfect to relax and enjoy the tranquil beauty of Sanur.

Sanur was first introduced to the international world through the paintings of Le Mayeur, a Belgian artist who fell in love with Sanur in the 1930s to 1950s. His studio was then made into a museum called Le Mayeur museum which is still in Sanur.

Known for activities such as a kite flying/surfing, yoga, bicycling, international culinary and beautiful scenery.

The coastline of Sanur curves about 8km from the north to south, between the coastal boarder of the Gianyar regency and the mangrove forest in southern Denpasar. Along this distance, enjoy several clean and quite serene beaches: Mertasari Beach in the sub-village area of Blanjong, Semawang Beach accessible from Jalan Danau Poso, Pantai Karang or “Reef Beach”, Segara Ayu Beach and Sindhu Beach. There are paved footpath connected to all these coasts that can be places for a great morning jogging and scenic cycling.

Before becoming a museum, this is the former home of noted Belgian impressionist Adrien-Jean Le Mayeur de Merpres. He arrived in Bali in 1932, and married the beautiful Legong dancer Ni Polok three years later, when she was just 15. They lived in this compound back when Sanur was still a quiet fishing village. After the artist’s death, Ni Polok lived in the house until she died in 1985

The house is an interesting example of Balinese-style architecture. Notice the beautifully carved window shutters that recount the story of Rama and Sita from the Ramayana. The museum also has a naturalistic Balinese interior of woven fibres.

The Bali Kites Festival is a series of kiting events that take place annually between July and August. The festival is slated for various dates, with main events customarily taking place along the eastern cost of Padanggalak, just north of Sanur. Hundreds of competing kite troupes gather from all over the island to pilot their traditional kites, alongside international teams with modern kites in various shapes and sizes.

The most notable temple in Sanur which contains a major important inscription on a stone pillar called the Prasasti Blanjong. The inscription tells a Javanese king who visited Bali in the 10th century and installed what was probably Bali’s first formal government.

The Bali Orchid Garden provides a hectare of landscaped tropical gardens with orchid species and admire various exotic tropical plants such as the rafflesia, anthurioums and heliconia.

The Sindhu Beach art market is a one stop shop for all manner of Balinese handicrafts, sarongs, t-shirts and knock-offs such sunglasses.
Address: Jalan Pantai Sindhu, Sanur

Stay in touch and connected to all the news and happenings.

View all photos
Book a room 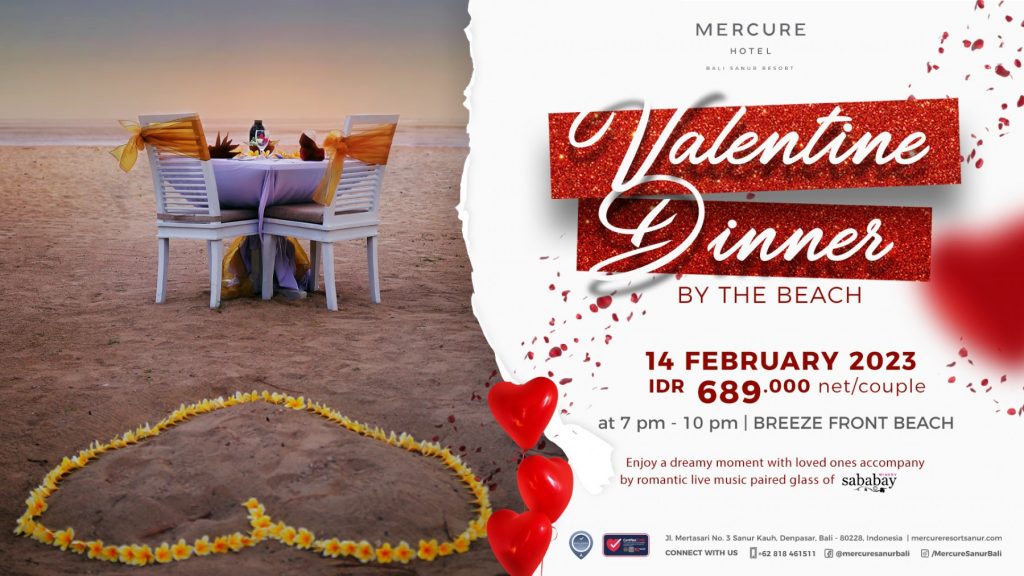 The best of Mercure with Accor App Close